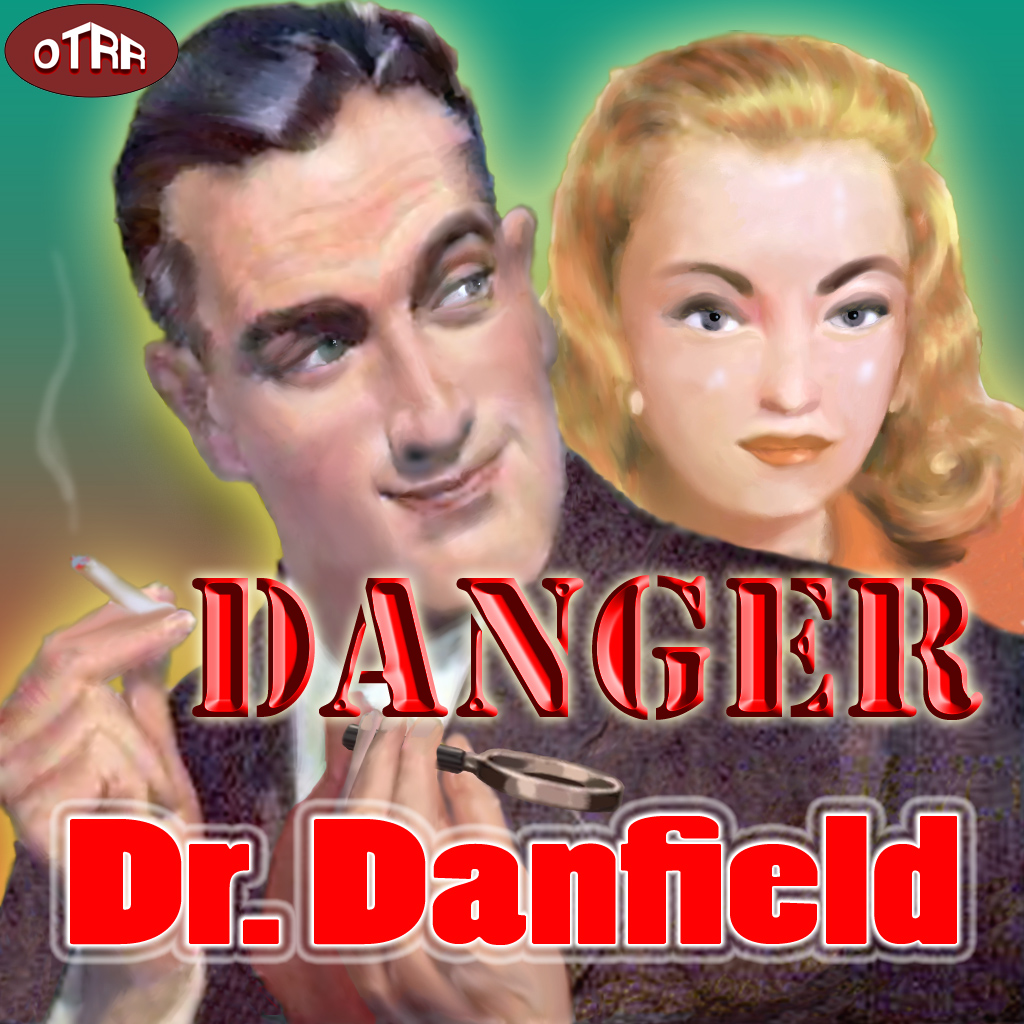 Danger, Dr Danfield was first broadcast on August 18, 1946 and consisted of 26 episodes with the last one being April 13, 1947. All episodes are available. It starred Michael Dunn as Dr. Danfield, with JoAnne Johnson as Rusty Fairfax, his secretary. The series was written by Ralph Wilkinson and produced by Wally Ramsey.

This series consistently featured some of the worst acting and writing of any detective show to reach the airwaves. The show had a formula with the crime usually being committed in the first third of the program, the good doctor solving it in the second third, and then pedantically explaining the solution to someone (usually his "pretty, young" secretary, Rusty) in the conclusion.

Dr. Daniel Danfield was an obnoxious unlicensed private investigator/criminal psychologist with an ego complex. Why Rusty would put up with this guy is beyond understanding. In this case, love is not only blind, but also deaf and dumb. But then, Rusty was no prize package either. In fact, the most complex person on the show is Dr. Dan Danfield's pretty young secretary, Miss Rusty Fairfax.

Why does Dr. Dan always call her Miss Fairfax? Dr. Dan goes to extremes to keep her at arm's length, but it's obvious he's just taunting her. After all, he's a criminal psychologist, and the way he treats Rusty is criminal! She can flare up, but usually just slow simmers in her professionally feminine way. Too bad one of the bad guys wasn't able to rub both of them out but these crooks were incredibly inept.

Unfortunately, the toughs, society-types in trouble and the necessary law enforcement officers in this series, are nearly as individual as furniture in a model home.

Still, if mindless detective drama is what you're looking for and you've tried the rest, then let Dr. Dan Danfield give you a little of a criminal psychologist's caseload. The show makes good drive-time or casual listening, since it doesn't make great demands on the emotions or intellect. From the Old Time Radio Researchers Group. See "Notes" Section below for more information on the OTRR.

Reviewer: johnniedoo@hotmail.com - - March 3, 2018
Subject: Dr Danfield woes
what's up? in chrome browser episodes 1-4 only play for seconds and that's it.. i quit trying to play any after that
been like this for days and days.
Reviewer: LeGrande - favoritefavoritefavoritefavorite - October 3, 2012
Subject: Scripts were reused later for other shows
In particular, "The Professor" (aka "Trixie's and the Bank Job") was slightly modified and used again in the series "Stand By For Crime" with the title "Trixie's Bank Heist."
Reviewer: out of stone - favoritefavoritefavoritefavorite - February 26, 2012
Subject: "I'm ready anytime" says Miss Fairfax.
I like a ‘pretty young miss’ in my old time radio, but if you’re terribly politically correct and miserable as sin then you’re going to hate it. Otherwise, it’s an enjoyable diversion - and contrary to OTRR crass opinion (parroted everywhere else), it’s actually VERY good.

On the 'burst of noise' that regularly pops up to shake you out of your skin and ruins a lot of the Danfield episodes - Really, OTRR, if you can't deliver descent audio then just pack up, go home and leave audio transfers to the professionals.
Reviewer: amor erotica - - January 27, 2012
Subject: Good shows, bad audio
"Noise artifacts" (on most recordings here)... not from the original recording quality, but from the transference to MP3, resulting in bursts of noise every 10-20 sec which make it impossible to listen on phones. If you're going to do it, DO IT PROPERLY!
Reviewer: slick.james785@gmail.com - favoritefavorite - December 9, 2010
Subject: Not THAT bad
Not every program is The Whistler or Sam Spade, Okay.. But This program IS an Okay way to blow off time otherwise spent in front of the idiot box. Even taken as camp value, Danger Dr. Danfield is a worthy addition to your OTR collection! In fact a good crime story would be: I Just shot my TV!